Peter Johansen taught journalism at Carleton University for nearly 40 years. In that role he taught literally thousands of students from Canada and abroad and published research in a variety of academic journals and books. He has judged travel writing competitions sponsored by Ottawa Tourism and the former Canadian Tourism Commission, as well as for TMAC, and has himself won numerous awards from the North American Travel Journalists Association for stories in such publications as the Ottawa Citizen, Toronto Star, United Church Observer and Inns Magazine. For two years he wrote a bi-weekly travel column for Troy Media, a Calgary-based news syndication service. 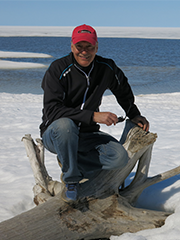 Freeman Patterson has been a photographer since 1958 and a full-time professional freelance photographer and writer since 1965. He has taught week-long workshops in photography and visual design in Canada since 1973, in South Africa since 1983, and from time to time in Australia, New Zealand, Israel, France, the United Kingdom, and the United States.

The author (photographer and writer) of 15 books, including five instructional books for photographers and co-author of two others, Freeman’s images have been exhibited around the world and Fredericton’s Beaverbrook Art Gallery hosted a four-month, 115-print retrospective exhibition of his photographs in 2013. Freeman was the 2004 Writer-in-Residence at the University of P.E.I. and the 2005 Visiting Scholar for the Medical Humanities Faculty of Dalhousie University, Halifax.

Freeman is a member of the Order of Canada, the Order of New Brunswick, and the Royal Canadian Academy of Art and has received the highest honour of several international photographic organizations, Canadian universities, and arts bodies. He spends about eight months a year at his home in Shamper’s Bluff, New Brunswick (where he engages in the fine art of gardening and a lot of other hard work) and the other months travelling (photographing, writing, and teaching) both in Canada and abroad.